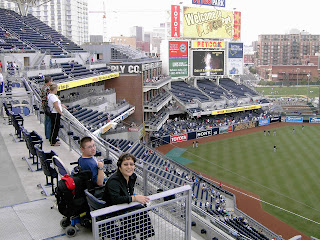 Tim is planning the next big trip, another addition to his quest to visit every Major League Baseball stadium…

In my last two segments, we decided which cities we were visiting, what games we would see, and the approximate dates of travel. Next, I need to figure out how much hotels will cost, how we will travel between cities, and how much that will cost. Right now, the costs I’m calculating are more for making a budget…as we get closer to the travel date, my dad says we will probably find some better deals.

(Note: We’ll be updating these prices for 2022 in the last post of this series, stay tuned – Ed)

A quick check on hotel rates found us rooms in Cincinnati for around $150 a night; St. Louis at $120 per night; and Kansas City at $90 per night. This I did using Expedia and the Marriott website. We like to use Marriott because of our points and the fact that they guarantee accessible rooms on the site. When it comes time to book, I’ll try to pare down those prices a bit.

Now, to get from Cincinnati to St. Louis, there are basically three options: fly, train, or rent a car. Airfare fron Cincinatti to St. Louis would be around $175, but Southwest has cheaper fares from nearby Louisville, Kentucky from around $75 to $120. Amtrak would cost $64 per person but the train leaves in the afternoon and would arrive around 8pm. A one-way rental car would be around $250 and take around 6 hours to drive. I’m tentatively going with Southwest on this leg but may make a cancelable car reservation if I can get that rate down.

So here’s our initial budget for three people:

Next, we start to build an itinerary.